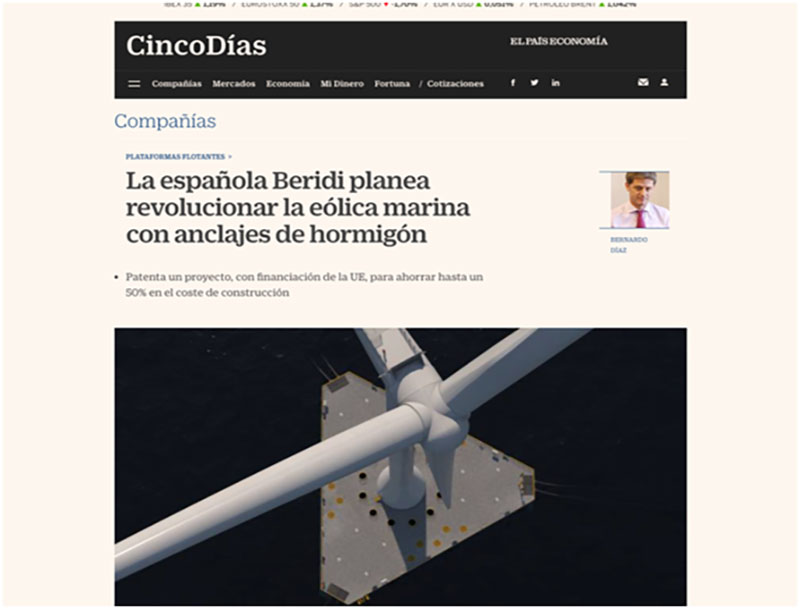 Posted at 22:01h in Corporate News by beridi

Cinco Días, the oldest in the Spanish economic press, publishes an article about Beridi that causes a significant impact in the sector.

The article, published in Spanish, is translated next.

Beridi patents a project, with EU funding, to save up to 50% on construction costs

The generation of renewable energy by floating offshore wind is experiencing a boom worldwide, supported by continuous technological advances. Until now, offshore wind has been based mainly on Fixed bottom foundations, so only suitable for shallow waters. The development of floating platforms at competitive costs (the installation of floating turbines is currently very expensive and time-consuming) would extend the playing field into deep waters, that can take advantage of winds with greater intensity and duration.

Reducing costs of floating wind deployment is a race (still in the pre-commercial phase) in which both global large energy groups and specialized engineering companies with disruptive capacity are immersed. This is the case of the Spanish company Beridi Maritime, a specialist in the construction of platforms for ports.

The firm from Madrid, with more than 20 years of experience in maritime engineering (Berenguer group), has patented and developed a floating platform for deep waters, based on concrete that allows the installation of the largest wind turbines (larger than 15 MW) in a safe way and with savingsof up to 50% in the costs of the platformwith respect to other competing technologies (according to the company). This would imply a reduction of more than 15% in the overall costs of construction and installation of a floating wind farm.

Archime3, which is the name of the project with the new patented technology, is based on concrete that has substantial advantages in terms of costs, strength and durability, compared to the steel used by most of the players in the floating wind power market.

In addition, thanks to its unique design, the construction is compatible with concrete caisson technology, which allows the manufacture of a platform of several thousands of tons, in a few weeks, says the company.

«We would be talking about being able to build a floating wind farm of several hundred megawatts in a matter of a few months, instead of years, with the implications that this has in achieving the objectives set by Europe», Javier Berenguer (CEO), counselor, highlights to CincoDías.

“We do not require special port infrastructures, or ports with a special draft. Our platform can be built in most ports anywhere in the world. Estimates are 240 million euros in savings in a medium-sized wind farm”, he adds.

Beridi’s Archime3 project has already received 2.65 million euros of public funding (European and national grants). Of the total, 2.4 million correspond to the European Commission within the framework of the H2020 Research Innovation Program. It also has the support of the CDTI (Neotec initiative). Beridi is now preparing the first full-scale prototype, 1.5 MW, to be developed soon in the waters of Gran Canaria.

Meanwhile, the Ministry of Ecological Transition has just made a public declaration defining the route time of the deployment of offshore wind in Spain, one aspect, the regulatory one, basic for the development of these new technologies. Spain plans to reach up to 3GW of power in offshore wind, until 2030. The race has only just begun.

Floating platforms will represent a market opportunity of € 22 billion until 2035, when 27 GW of floating wind is expected to have been installed. The regions with the greatest potential are Europe, the USA and Japan. “We aspire to capture 20% of the market; it means potential income of more than 300 million euros for Beridi ”, points out Javier Berenguer.

Floating technology is already present on the coasts of Scotland, Norway, France, Portugal or Japan, but developments barely reach 70 MW. In Spain, the experimental platform of EnerOcean in the Canary Islands and that of Saitec (BlueSath) in Cantabria have been tested. RWE and Saitec in the Basque Country are pending. Beridi’s has the advantage of being applied to large wind turbines. Iberdrola has its Flagship project in Norway.

Spain is a powerhouse in the incipient floating solutions for offshore wind farms. Of the 27 identified worldwide, seven are Spanish, highlights the Ministry of Ecological Transition. It is also the European country with the most R&D facilities for floating wind power and other marine energies, such as the Canary Islands Ocean Platform (Plocan), the Vizcaya Marine Energy Platform (Bimep) or the experimental zone for the use of marine energy from Punta Langosteira, in A Coruña.

GO TO SITE
We use cookies on our website to give you the most relevant experience by remembering your preferences and repeat visits. By clicking “Accept”, you consent to the use of ALL the cookies.
ACCEPTREJECTCOOKIE SETTINGSCOOKIE POLICY
Manage consent

This website uses cookies to improve your experience while you navigate through the website. Out of these, the cookies that are categorized as necessary are stored on your browser as they are essential for the working of basic functionalities of the website. We also use third-party cookies that help us analyze and understand how you use this website. These cookies will be stored in your browser only with your consent. You also have the option to opt-out of these cookies. But opting out of some of these cookies may affect your browsing experience.
Necessary Siempre activado
Necessary cookies are absolutely essential for the website to function properly. These cookies ensure basic functionalities and security features of the website, anonymously.
Functional
Functional cookies help to perform certain functionalities like sharing the content of the website on social media platforms, collect feedbacks, and other third-party features.
Performance
Performance cookies are used to understand and analyze the key performance indexes of the website which helps in delivering a better user experience for the visitors.
Analytics
Analytical cookies are used to understand how visitors interact with the website. These cookies help provide information on metrics the number of visitors, bounce rate, traffic source, etc.
Advertisement
Advertisement cookies are used to provide visitors with relevant ads and marketing campaigns. These cookies track visitors across websites and collect information to provide customized ads.
Others
Other uncategorized cookies are those that are being analyzed and have not been classified into a category as yet.
GUARDAR Y ACEPTAR